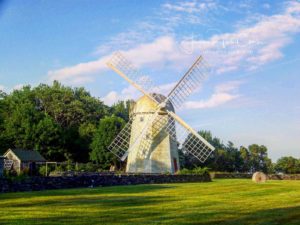 The Jamestown Windmill, Rhode Island
Jamestown is a town located in Newport County, Rhode Island, in the United States. The population was 5,622 at the 2000 census. Jamestown is situated almost entirely on Conanicut Island, the second largest island in Narragansett Bay. The Jamestown Windmill is a smock mill in Jamestown, Rhode Island within the Windmill Hill Historic District on North Road north of Weeden Lane. The 30-foot (9.1 m) high windmill was built in 1787 to grind corn after the British occupational forces destroyed the previous mill around the time of the Battle of Rhode Island. The windmill operated until 1895. Several renovations were done in the 20th century and the mill is presently maintained by the Jamestown Historical Society. The site was added to the National Register of Historic Places in 1973.