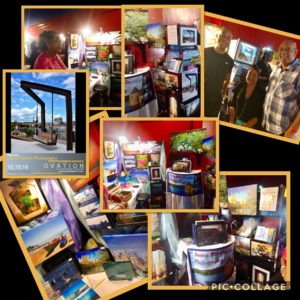 The winners of the raffle are:

please email me at Juanarafaela@gmail.com to confirm your selection and finalize arrangements to receive your prizes.

Thank you for your support and encouragement. It means a lot to me.

Photography Raffle.
This is your chance to own a piece of my work!
Can’t attend the Philadelphia Ovation Show on 10/10/18 at the Trocadero Theater? You can still participate in The Photography Raffle 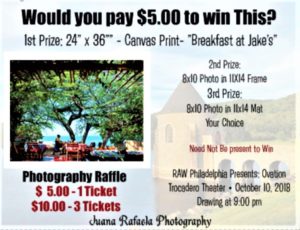 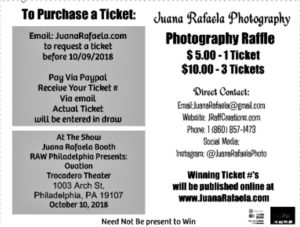 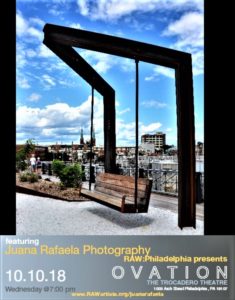 Purchase Tickets online via the link below:
http://www.rawartists.org/juanarafaela 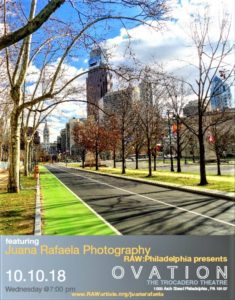 Dear Family and ​Friends:
I will be participating in the Philadelphia RAW Artist show in October.

After completing a successful show in Connecticut, I have been selected to participate in a show by RAW Artist​ and I ​am asking for your support.
​RAW Philadelphia presents OVATION
Wednesday October 10th 2018 at 6:30 pm
The Trocadero Theatre
1003 Arch Street
Philadelphia, PA 19107

Tickets for the show are $22 each and must be purchased by Wednesday October 3, 2018, online via the link below:​

You will also see my profile and showcase at the link.  For each ticket purchased you will receive an 5″ x 7″ postcard ready for framing. I will post a gallery of the post card selection on my website JuanaRafaela.com Please consider purchasing a ticket. ​

You may go to https://www.rawartists.org/showcases and select the city, Philadelphia, PA to see all the artist who will be featured at the show. There will be about 40 artists in various genre including music, dance and a runway show. It promises to be quite exciting.

If you plan to attend you will be able to select your gift from a selection of postcards at the show. If you are unable to attend, I will be happy to mail your gift you.

I will also publish details on a raffle in another week or so.

I will be working diligently to ensure that I have a wide selection of high quality prints in several sizes, media and price ranges for your consideration at the show. I hope that you can attend and see my work. Thanks as always for your support.
Many thanks
Juana 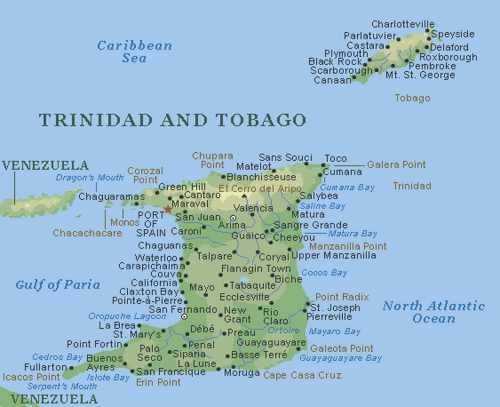 The Republic of Trinidad and Tobago is an archipelagic state in the southern Caribbean consisting of  two main islands, Trinidad and Tobago, and numerous smaller landforms including Chacachacare, Monos, Huevos, Gaspar Grande (or Gasparee), Little Tobago, and St. Giles Island. The entire population is estimated at 1.3 million (2005).

The climate is tropical. There are two seasons annually: the dry season for the first five months of the year, and the rainy season in the remaining seven of the year. Winds are predominantly from the northeast and are dominated by the northeast trade winds. Unlike most of the other Caribbean islands, both Trinidad and Tobago lies outside the hurricane belt and have deep water harbors.  As a result, there is a well developed boating industry on the islands and many private owners in the eastern US use docking facilities during the hurricane season.

In 1498, when explorer Christopher Columbus set foot on Trinidad, he found Arawak and Carib Indians who prospered here on the island the Amerindians called Leri, land of the Hummingbird. When the Spaniards discovered no precious metals on Trinidad, the Amerindians were enslaved and shipped off to work on other Caribbean settlements. One hundred years later Spain established Trinidad’s first European community, San Jose de Oruna (St Joseph), which was sacked and burnt by Sir Walter Raleigh in 1595. Trinidad remained a Spanish possession from the 15th Century and the Cedula of Population in 1783, allowed French planters and their slaves to emigrate from the French colonies to the island.

The British would capture Trinidad in 1797 and negotiate an amicable treaty of rule with the Spanish. In the following years, enslaved Africans were brought in to work on sugar plantations and in 1802, the island became a British colony. After slavery was abolished by Britain, landowners imported thousands of indentured laborers from India, China and the Middle East.  In 1889, Britain joined the smaller Tobago to Trinidad as an administrative ward. The islands achieved independence from England in 1962 and became the Republic of Trinidad and Tobago in 1976.

A visit to Trinidad today would reveal a multicultural melting pot stirred by the descendants of settlers from Europe, Africa, Asia, South America and the Middle East. Unlike most of the English-speaking Caribbean, Trinidad and Tobago’s economy is primarily industrial, with an emphasis on petroleum. Trinidad and Tobago is known internationally for its annual Carnival when the population of the islands increase by .5M-1M people. It is the birthplace of steelpan, calypso, soca, and limbo.

At the Raw Artist: Connecticut Presents Connect Show we held a $5 raffle for a 9″ x 6 ” – 1″ Acrylic Block of Seville Dam in Barkhamsted, CT.

The Winner of the Raffle is Samuel  Bowens III. ​Since Sam was not present at the drawing,  I delivered the prize to him last Thursday. 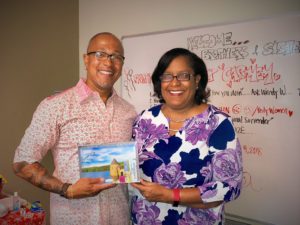 He in turn sent me a photo of the location of the Seville Dam Acrylic Block in his home.  I am humbled! 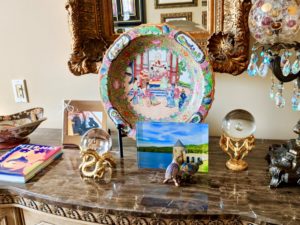 Thanks Sam! I trust that the piece will bring you many years of joy! 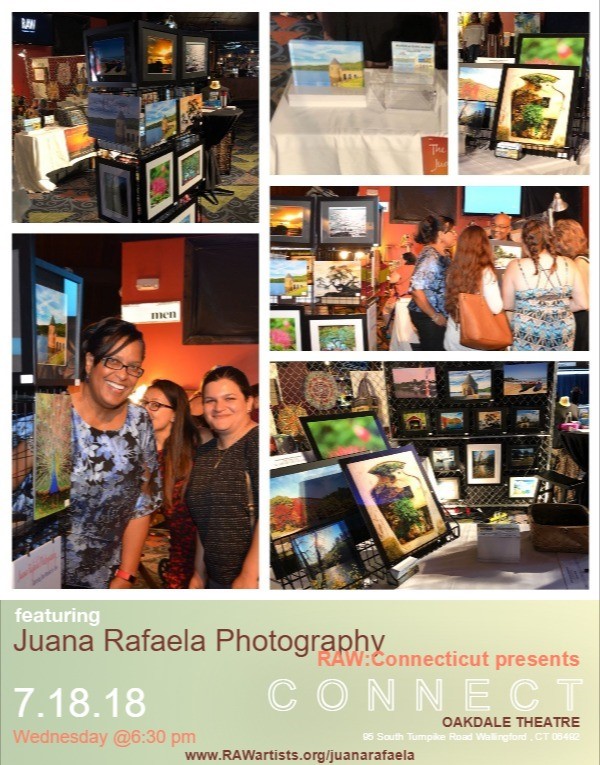 Dear Family and ​Friends:
First, I offer my heartfelt thanks to those of you who purchased tickets, attended the show and or lent your support in so many ways. I especially want to thank my husband Gary, I could not have done it without him. Thank you Gary.
We sold 50 tickets!! Thank You! For those of you who were unable to attend, we missed you, but, per your request, I was able to donate 15 tickets to others who were able to attend.
Over 800 people attended the show and our little booth was quite busy all night long. There was a lot of interest, especially in my international, beach and military photographs. While we achieved modest sales, the feedback was overwhelmingly positive. What a great experience! I can’t wait to do it all over again. Attached are a few photos from the night.
At the show we held a $5 raffle for a 1″ Acrylic Block of Seville Dam in Barkhamsted, CT.

The Winner of the Raffle is Sam Bowens III. ​Congratulations Sam!!!​

If you purchased tickets, I need to confirm your photo gift selection. I will send you a separate email with instructions.
This was a lot of hard work, but I learned a lot and my next show will be even better. I have been approved for the next RAW Artist Show in Philadelphia. Stay tuned for details! Thanks for all you did to make my first US show a success. I really appreciate your support.
Many​ Many Thanks
Juana 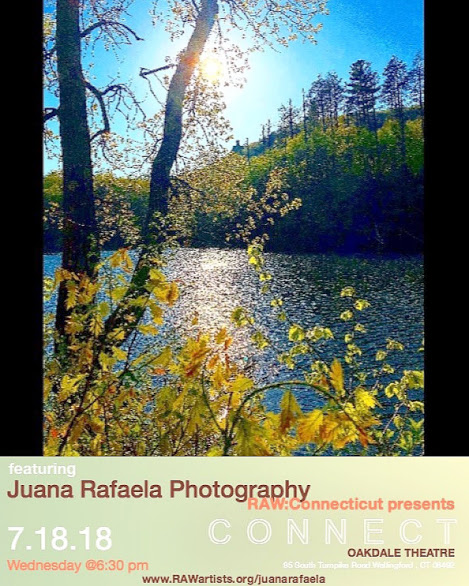